Home » Fictional Musings » The Bleriot Monument and other Muses

The Bleriot Monument and other Muses

I’ve been stalled in the writing of my final set of chapters.

I knew what I wanted to happen. I knew where I wanted it to happen, and I’d looked at the photos of Bleriot’s landing site at Dover Castle, but somehow, I couldn’t get it right.

Every time I tried to put pen to paper, nothing happened.

Oh I got Mark to Dover all right. But after that nothing. You see, Mark had already been to Dover on a school trip, and stood on the monument. Did the plane thing. 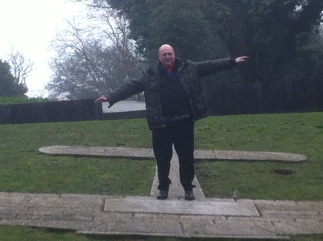 I decided I needed to go to the scene of the crime and get the lay of the land so to speak. So heading off early Saturday, we ventured south of the river.

It was raining and misty; we nearly got killed on a roundabout. But once on site things began to fit into place.  We walked up past the monument. Through the gap you can just see behind OH, there’s a path. It heads up to a road, where – if you’re an imaginative sort you could believe there was an underground facility!  Maybe there is. Who knows?

Turning our back on the road, this was the view: where better to hide a secret facility than in a castle?  Not the best thought I’ve ever had, but it would do, for starters.

The hill where Bleriot landed is quite steep, OH slipped and “slided” and nearly killed himself on the grass – well it was wet.  I could easily see how Mark might fare going down that hill in the dark, on a cold wet January night. My thoughts clicked into place. I was happy. Men with guns heading off to do battle.

Because it felt compulsory, I took a picture of the plaque itself.

Shame it was all kicking off in 1913 not 1909. But with one Welsh Wizard, one Italian Radio Ham, one future PM and the role model for James Bond, I decided that I’d stay clear of French aviators…

At least, we’d solved half the problem – and it wasn’t even lunch time. But I still really didn’t like the idea of having the secret base in the castle itself. There had to be a better answer.

We we both walked back to our car park. Unlike Melville we didn’t park in the road, we parked conventionally. Which is good, because I saw this in the woods:

“That’s the entrance to the secret base!” I exclaimed.

OH looked indulgent. He’d done the Bleriot thing! He was happy! I took some photos – looking from the manhole to different areas of the woods. Didn’t like any of them. Then, over lunch in Smeeth – at a rather nice craft centre – I took another look. And this one grabbed me. Heading back to the monument.  Back to the place where the underground secret base could so easily be.