Home » Family Life » St George, the Dragon and an Elephant

St George, the Dragon and an Elephant

OH and I went to Amsterdam yesterday. Day trip: we flew from Southend.  It’s definitely a doo-able day trip; if you know where you want to go; what you want to do; or you’re up for an amble.

After all, at under an hour away (as the plane flies)  + a fifteen minute train trip from Schipol, it’s no different to going to London.

And so, after a gorgeous cup of coffee and a croissant, (you rarely get that in London) we headed for a boat trip around the canals.

OH has never done this before. I have: usually in the company of hung over 6th formers at the end of a day trip around the battlefields of WW1. It’s a very pleasant hour. We had a superb captain, and because it’s April a quiet cruise around the Herengracht (or Patricians canal.)

Enter St George and his Dragon.

Their image (complete with elephant) adorns one of the houses on this canal.  It is beautiful, especially when the sun shines on the gilt work. It’s a fabulous piece of artwork and it stands out. Hung over or not. 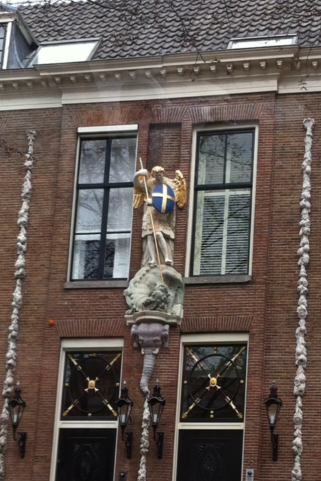 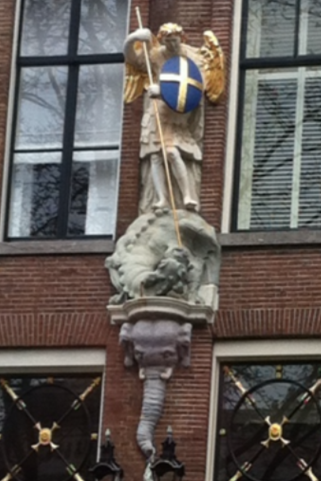 I must have pondered it in the past, and I pondered it yesterday: why does St George find himself destroying his dragon on top of an elephant?

So let’s look at this conundrum in detail :

Why is there a dragon? Well it’s traditional isn’t it? But according to Turkish mythology their dragons don’t have wings. George’s dragon definitely has wings. So where’s that bit from?

The dragon is all Thomas Caxton’s fault for printing Jacques de Voragine’s book the Golden Legend.

In Voraigne’s book, the dragon was terrorising people so George slew it. Simples. But Vorgaine’s is French. How does a French tale of a Turkish Saint work for a British audience.

Ahh well here’s where we can blame the Anglo Saxons and the wily nature of the early English church. Voragine’s tale was similar to an existing Anglo Saxon one

Where does the elephant fit in?

Claudius had a war elephant in his army when he invaded Britain. Hannibal used elephants to cross the alps. Elephants were obviously a weapon of war. And as a Roman Tribune George would have known of this use of elephants.

Ergo: what better to go into battle against a dragon on? But it still doesn’t explain how an image of England’s patron saint gets onto a house in Amsterdam? Quite simple: it’s on the Patricians canal; where an awful lot of trade went on between the Dutch and the English.Problem solved.