Weekend Theme: Down the Rabbit Hole

I’ve never been down a rabbit hole. Well it’s more of a “dog thing” than a “human thing”. Consequently, Sidey’s invitation to post didn’t strike me as one I was in any position to engage with. But I do know a girl who is currently facing a bit of a conundrum…

So if you’ll forgive me, I’m going to let Lucy – the heroine of my other blog – explain why she’s down a rabbit hole. Over to you, Luce (f0r other takes on the theme click here)

Dear Reader of More Than a Cat’s Blog,

Just in case you didn’t know …. I’m a time traveller.

No I’m not having a laugh. I’m dead serious. I won’t bore you with the story of my life; up until the October of 2013 it was normal. Now… well – let’s just stick with that Facebook thing and say:

Several things you do need to know though… I’m 18; it’s 1949 and apparently I’m in the 35th year of a relationship with a man who’s an Admiral. Trouble is – I’ve only just met him.

I’ve been time travelling, with my mate Mark, for quite some time now and most of it seemed to make sense. We arrive somewhere, things go wrong, we sort them out and then, when Time’s back on a reasonably correct course, we leave. As I said, it usually makes a weird kind of sense.

But this time it’s different.

The Nazis are in control.

Now I don’t know about the universe in which you live, but in my universe – the one at the other end of Southend Pier – the Nazis were well and truly hammered into oblivion in 1945.

So obviously we’ve got to do something, which is why Mark has gone to the Volks Palast – just outside Muswell Hill to look at Marconi’s diaries. They’re in code – and no one can crack them. This is good because if they could be cracked, the Nazis would have the secret of Time Travel.

The Volks Palast AKA Ally Pally

I’m supposed to be meeting Mark at 10 Downing Street; but instead I’m in Leytonstone. I can’t give too much away; you’ll have to see the other blog if you want to know why, and this post’s about being down a rabbit hole. So let’s go back to the Admiral.

He’s actually a really nice guy. Tall, handsome, with the most stunning blue eyes imaginable. He’s kind and thoughtful, he’s suave and sophisticated. He’s just shown me a photograph that’s sent me into a bit of a tail spin. You see it shows that we were close. Really close.

Not that I believe the photograph he showed me’s genuine! I’m from the photoshop age, remember. I don’t trust anything. And even in 1949 photographs could be altered. Look at what John Heartfield managed to achieve in the 1930s.

Those photographs were amazing as you can see from this small collection. 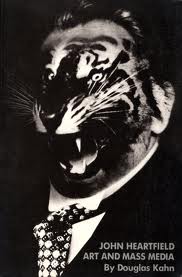 Trouble is, my admiral’s not the guy I will meet. Currently he’s old enough to be my dad.

Now that might not worry some people, but it worries me. You see I’m classed as the school geek – and the last time I was at school ( in October 2013) I’d just turned sixteen and I can just hear the gossip going round the playground. It’ll be vile and full of innuendo… Mark – if he found out about it would hit him.

Look at me, I live in a world where the sexual revolution took place when my gran was a child. Free love came and went; Bras were burned. AIDS was discovered…

But here I am… I’m 18 years old – in Leytonstone – in ersatz 1949, writing this piece for you to be published in the May of 2013 and I’m still worrying about playground gossip.

The school kids I’m worrying about, haven’t been born yet. My school hasn’t been built yet. Come to think of it if you look at the history of it all; I’m not the first girl to have an older boyfriend – and I sure as heck won’t be the last.

Actually scrub that last one…

Anyway, thanks for letting me explain why I’m down a rabbit hole. Probably normal service will be resumed soon. Until then…

Written for Sidey’s Weekend Theme: Down the Rabbit Hole