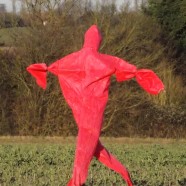 It’s strange how on your commute to work you tend to mark your seasons by the changing landmarks.  And after spotting the very unusual scarecrows for the first time last year, I’ve been looking out for the Family (as Doctor Who fans know they are called). I was prepared this year, with the Nikon in the jalopy so I could get better photos.

I was obviously too organised

The fields were  ploughed; crops were sown but there was no sign of the family. I searched high and low for them – even detouring off the main road and heading off down a couple of country lanes – but nothing. Perhaps the right crops weren’t being grown this year; or maybe the birds had been so wigged by them last year that they’d called a truce, and flown off to pastures new.

Whatever? They weren’t there.

And then, one day, when I’d given up all hope – there they were. Not as many as last year it is true, tucked into a corner clearly hard at work.   Suddenly spring had come; all was right with the world!! 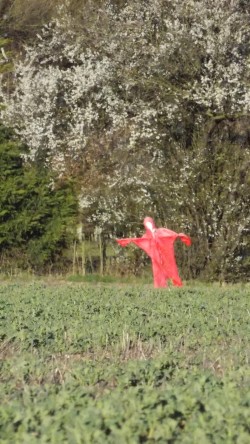