Home » Fictional Musings » It’s all in the Clothes

It’s all in the Clothes

OH and I have been thinking a lot about Emily and her relationship with Symington. She’s an East End girl of genteel stock; he was part of the late King Edward’s crowd. . He has been asked to look after her, she has contacts in the East End that are vital to a criminologist; but she is feisty and independent. She will not accept help easily but – if she doesn’t – the work house is the only alternative.  However, she’s a girl who doesn’t trust easily (she suspects him of having designs upon her personage; a bit like Liza Doolittle did of Henry Higgins) – well with her father, do you  blame her?

Emily’s mother was a rural vicar’s daughter who ran off with an artist with a roving eye. Our heroine passed the 11 plus but never went to grammar school because after her mother died, her father squandered what little money was left. He got involved with a bunch of Latvian disidents in the summer of 1909, and by February of following year he’s dead, leaving Emily destitute and about to be thrown out of her lodgings.

She’s not the world’s prettiest girl;  she’s a sort of a blond and she’s a little too thin. But she has character  – almost an air of the late Queen Victoria about her, you might say. A true east end matriarch in the making.

“It might help if I knew what she was wearing.” OH opined suddenly from behind his computer screen.

“Clothes that are too big for her.” I replied. “She’s not eating properly.”

I got the look that told me that wasn’t helpful, so  I dutifully opened the folder of images I’ve been collating for this project and emailed a few over.  “Something like this” I said, “only in cheap materials.” 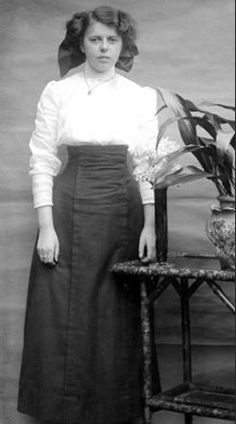 I’m never sure what to make of Uh huh! It’s like mmmmmm only shorter.

So I asked him to explain his thinking.

“Well she’s certainly a respectable girl, dressed like that.”

I smiled and  5* the dresses for use in descriptive bits.

“What about after?” he asked. “When she’s working for Symington full time?”

“I thought something like this?” I said, sending the next three stills over. 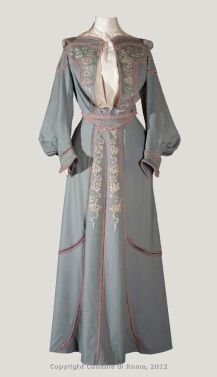 There was a pause. OH looked up from the screen. I caught him grinning.

“Well he’s certainly no Hercule Poirot and she’s no Miss Lemon, that’s for sure.”

As a friend of mine says: job jobbed.