Posted by MoreThanACat on Aug 17, 2014 in Family Life, travel, whimsy | Leave a comment

If you are traveling along the A414 to Malden you will go through Woodham Mortimer and you will pass this view. Blink – of course – and you will miss it.

On the left of the road there is a church and a house with a blue plaque. To the right there is  what appears to be a war memorial. Me and OH have passed through on our way to the park in Malden – our destination of choice for a picnic – many times. Until today, however, we have not stopped. Which turns out to have been  mistake because there’s an awful lot of history in a very small area.

The church – St Margaret’s – was our first stop. Beautiful isn’t it?

It has some unusual headstones and a war memorial to the dead of the Great and Second World War. My first thought when I saw these metal headstones were that they were Huguenot in origin.  But now I’ve had time to compare it to the the first picture in the set, I’m not so sure.  The dove is at the bottom of the spike, but when you google Huguenot headstones, they are more traditional in design, unlike these little beauties.  So: for the moment I will stick with my suspicions (like Mr Wicher) that there is a French connection.  Rod Collins.com  has found  other iron crosses in Yorkshire, but like me cannot find out much about them. He concludes  that they are rare. And yet, in this little churchyard there are some thirty of them. Three of the tall white headstones; the single one covered in ivy and some twenty in total of the round ones. Some still doing their job as you can see, but the others are ranged against the wall, like you see when a graveyard is turned into a park or area of common ground. Like Rod Collins if any one can shed any light on these beauties, I would be most grateful. 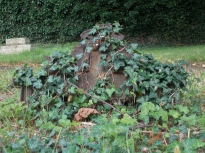 The second stop was the blue plaque. It is on the gate post wall of Woodham Mortimer Hall.  It tells of the Chamberlen’s – Doctor’s in the 17th Century. It tells us they were obstetricians. I had never heard of them, which is a shame. I am on this planet because of their invention. 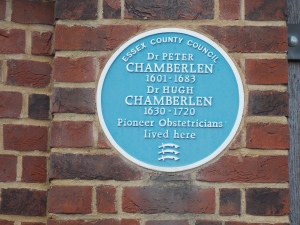 You see the Chamberlen family  invented the forceps. 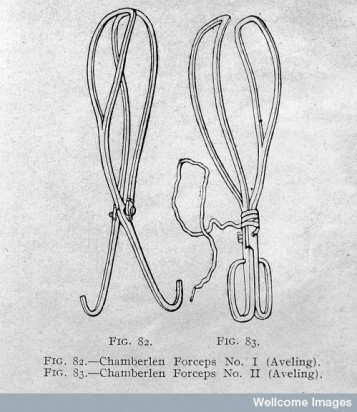 But not only that… they were Huguenots! Their house backs on to the graveyard… perhaps there is a french connection after all.

Crossing the road, we went to the monument. It’s not a war memorial; it is a grade two listed monument erected in 1825 . It’s a testiment to the charity work of William Alexander – another inhabitant of Woodham Mortimer estate, who left his fortune to the Worshipful Company of Coopers. On the reverse – less well preserved – are the names of the wardens in place in 1825/26. 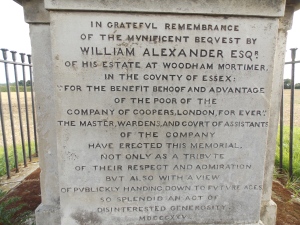 As you will agree, we made a superb decision today.