No I’ve never been to gig. Shocking I know. Don’t know why. Never got round to it.

But when The Pet Shop Boys announced their residency at the Royal Opera House earlier in the year – I realised I could rectify this omission and remove two from my list in one fell swoop. So we bought the tickets and waited, with increasing excitement, for the big day to arrive. 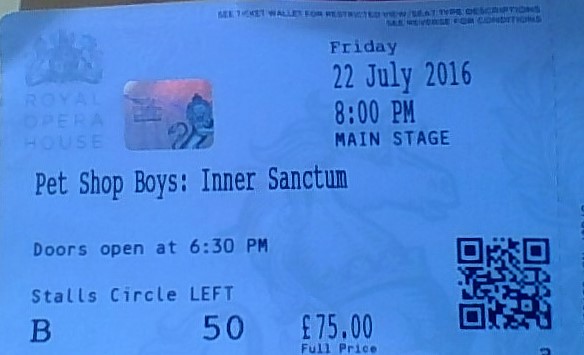 OH is, of course, no stranger to gigs (he did rodie for Pink Floyd after all), but I wasn’t sure what to expect – having only seen gigs on the TV  – except an extravaganza.

The light show was amazing; the songs – a good mix of old and new. I don’t think anyone sat for more than a few minutes at anyone time – and that was only during the bits you couldn’t dance to. My favourite bits – obviously “It’s a Sin” and “Always on my Mind” but the show stopper were the dancers in the inflateable suits. Fabulous!!

It was two hours of nonstop entertainment – and (according to my fitbit – whose flower was on dancing overload)  – I managed to rack up  18 minutes of elliptical exercis,  and there was me thinking I was dancing!!

As for the Royal Opera House: it’s so beautiful. From the red velvet drapes; the gold wall sconces, and the oppulence of the gold leaf. Amazing. I also like the way the stalls were on a noticeable rake.

All in all a fabulous night out, topped off with a visit to one of my favourite all night restaurants – VQ for breakfast!